With ease and serenity for more self-confidence and presence!

My name is Violetta Haag, or simply VIO. My basic approach is person-centered coaching: focus on people. My goal is to accompany people on their own individual path and to support them in demanding and challenging situations.

My coaching is your companion.

The coach is recognized and promoted in his unique individuality. My coaching promotes my own finding of solutions and helps find my own balance again.

As a certified coach with a business background, yoga teacher and hypnosis master, I accompany my customers on their very individual path to personal development and more quality of life!

I would describe myself as a hard-working analyst. Entrepreneurial thinking is in my blood, creativity is given to me. Lifelong personal development is always my maxim.

If I succeed as a coach, the world will have gotten a little bit better!

Nice to have you here! 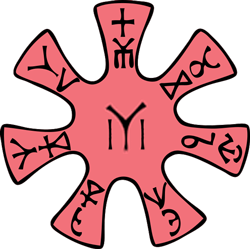 In the course of excavations in Pliska, the former first capital of Bulgaria, archaeologists found a unique object. The rosette dates from the 7th to 9th Century. It was made of bronze and has seven rays. Not only is their shape remarkable. Old protobulgarian characters, also known as runes, are engraved on the rosette.

According to current research opinion, the rosette represents the old, cyclical Bulgarian twelve-year calendar, which is described by UNESCO as one of the most precise calendars in human history. The runes of the outer circle are the symbols of the five planets of the solar system known at the time of the rosette, Venus, Saturn, Mars, Jupiter and Mercury, as well as the symbols for the sun and moon. The runes of the inner circle represent the seven days of the week.

The most famous Bulgarian rune symbol - IYI - is engraved on the back of the rosette. It is the symbol of the sun and is understood as an expression of the religious ideas of the Protobulgarian population.

As a Bulgarian, I chose this symbol because I felt a deep connection. In addition, the rune symbol - IYI - stands for the connection between heaven and earth and is simultaneously connected with the seven chakras through the planets.

Each person has 7 main chakras in their ether, astral and mental body, which absorb, convert and release subtle energies. There are also numerous side chakras.

Every chakra starts from the spine. Chakras 2-6 extend to both the front and back of the body.

This chakra is connected to the base of the spine and points down to the floor between the legs. It creates a connection between the subtle energy system and the earth. It supports our will to live and provides our body with vitality. His energy relates to the need to eat, to have accommodation and to meet basic living needs.

This energy center has a close relationship to bones, nails, teeth, the blood and all long-term, chronic diseases as well as the ability to regenerate after exertion. In addition, the legs and feet are closely connected to the root chakra (exchange with the earth, being rooted). It is also related to the so-called limbic system, the part of the brain that is responsible for self-preservation (nutrition, attack and defense) and species conservation (sexuality).

This chakra is connected to the sacrum. His energy is focused on reproduction, sexuality, physical enjoyment and the attractiveness of relationships. It is also one of the places where guilt and humiliation are hidden. It is the main place for the shadow of the ego.

This chakra is related to everything that is fluid in the body, to the fluid-producing, processing or storing organs, to the hair, to the skin and generally to the genitourinary system. Another important connection is to the limbic system, a part of the brain (explanation see root chakra).

In today's world, the sacral chakra (according to Tibetans) is actually considered to be a secondary chakra, since it is supposed to go below the threshold of consciousness. The spleen chakra is to become the main chakra in the future.

This chakra is connected to the area of the solar plexus. This brings and sends energy into the body, which is necessary for self-expression (personality). Since the will manifests itself through this center, it is also called the center of power. Confidence and determination as well as fear and anger can be localized here.

This chakra relates to all digestive functions and organs, physical and mental resilience, personal focus and the nervous system. There is also a connection to the eyes as an analytical sense.

In this way, he remains trapped on the astral and etheric levels and bound to the roughest forms of desire. Life then ceases to be an experience and becomes a constant struggle for existence.

This chakra is connected to the middle of the chest in the area of the physical heart. It is related to all aspects of love and is also geared towards joy, respect and devotion. Spiritual guidance and higher awareness can also manifest through the heart chakra.

This chakra is in the throat area and has to do with the expression of creativity through language and writing. It is also related to contemplative contemplation and some aspects of thinking and planning. This chakra shows the relationship we make with others and especially with groups.

The Throat Chakra has a strong relationship to the larynx and vocal cords, skeleton, skeletal muscles, thyroid, the process of breathing in and out and hearing.

This chakra lies between the eyebrows and is also called the „third eye“. It is associated with self-knowledge, wisdom, higher consciousness, clairvoyance, simple knowledge, the ability to visualize and conceptual thinking. The forehead chakra is closely related to the eyes and to the understanding function of consciousness (understanding = bringing analytical and synthetic thinking together).

The apex chakra is located at the apex of the head and extends a little further. It establishes a direct connection to the higher power and to spiritual consciousness.

The apex chakra is the expression of the universal consciousness of unity and the union of opposites on all levels of a person. It remains passive until the person concerned has learned to sufficiently live the qualities of the lower 6 chakras. Then it begins to become active and make body-mind-soul a direct expression of the divine energy. God, man and the universe are one.

It is in the left upper abdomen. Associated organs are the spleen and liver.

Depending on the level of development of the human being, the chakras are smaller, larger or of a lighter color. In addition, they rotate more and more with higher activity, so that in the end they rotate four-dimensionally.

TAKE THE NEXT STEP NOW!